It was the uncertainty – not knowing what was just ahead of me in the dim light. The next flash of light gave me just enough time to make out a trio of silhouettes and the body of a horse lying in the mud.

Even from my perch on the walkway above the mock battlefield, I could see the consistency of it. Its guarantee to swallow whatever fell within its reach. The debris that littered the ground looked like artifacts from an archaeological dig site – all that remained of a civilization long fallen. It made me question more than ever how any soldier, let alone humanity, survived World War I.

I now had some semblance of why it was called No Man’s Land. Why no man really wanted to try to claim it. Thousands of lives lost for maybe a few miles of what could only be described as Hell on Earth.

My dad has always been a fan of war movies. I have seen a few myself and Band of Brothers ranks as one of the best miniseries I have ever seen; yet, those are just pictures. Moving, life-like pictures, but that is the norm in today’s society. There was a time not so long ago that photography, especially moving pictures, mesmerized crowds. Now, we get annoyed when something is not in high definition.

We have become desensitized.

The only way for the message to break through is by experiencing it. We will never experience the Great War of the early 1900s, but the National World War I Museum in Kansas City, Missouri will bring you as close as the 21st century will allow.

The best way to experience the museum is through a guided tour, so be sure to inquire at the front desk.

How could anyone find the courage to face that? Or were the soldiers unable to focus on any one feature of the horrific scenes that surrounded them?

Horses pulling large artillery pieces looked like something out of the Civil War (aside from the obviously modern artillery). A medical kit packed with morphine and unsterilized bandages made me physically recoil. But it was a simple wooden box that stopped me in my tracks.

One name painted over another. A soldier’s footlocker – the heart that holds his hopes, fears, and memories of loved ones – stripped and re-purposed. A physical reminder of the cold indifference and practicality of war.

Often known as the “War Over There,” United States history does not stress WWI as much as WWII because we were not as involved. In fact, we came in toward the end of the war, suffering only about 1% of the total casualties; however, those 100,000 soldiers deserve as much remembrance as any hero. 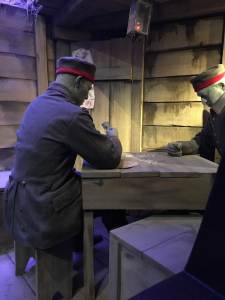 Looking through one of the peepholes, I caught a glimpse of life in the trenches. Claustrophobic, the long, narrow pathways were filled with supplies, debris, and despair. It was odd then to see the bunker with two men playing cards. I never imagined there would be time to be bored in war, though I suppose there would not have been much else to do when armies were lucky to move a few feet in as many months.

I listened to voices crackle over the speakers. I always think of soldiers in their early 20s or older, so to hear the high voices of teenagers relaying horrors I have only seen in nightmares sent a chill down my spine.

Looking up, I could see the edges of the pit flirting with the ceiling. Protruding out of the mud and dirt in various degrees were common household items. Ones you could see in my own house – photos of my family, my favorite blanket, broken plates that once held cookies made from Grandma’s special recipe.

I did not think I could be shocked any more until I came to the end of the tour. The last section of the museum’s main exhibit was a brief history of the circumstances that eventually led to WWI. We learned about WWI in history class and extensively covered the circumstances leading up to the outbreak of the war, but that was when I was in high school. Looking at it through the lens of a young adult, I saw so much more.

With the rise of industrialization goods were available to the masses for the first time and, as a result, people began to feel entitled to a certain lifestyle – much like we feel entitled to the internet and smart phones. The years leading up to WWI also saw an upgrade to communications, fueling connectivity, a love of heritage, and a sense of “our” people. In today’s society the previously mentioned internet and smart phones enable unprecedented global communication and connection. In the early 1900s this fueled the political turmoil that eventually reached a resolution through a war that cost 9 million lives.

These heroes are remembered in the poppy field as one poppy represents 1,000 fallen soldiers.

My great-grandfather fought in WWI, if we do not learn from the lessons he and so many others fought for, then our own political strife could catch fire and doom us to repeat history. As Georges Clémenceau, former prime minister of France said, “The Glory of civilization is that it enables us – occasionally – to live an almost normal life. The Armistice is the fall and rise of the curtain.” We can either sit back and watch the show or we can take an active part in shaping the story.

Read a historical fiction piece inspired by my view of the trenches here.