Screamed by voices big and small, high and low, it was almost always followed by an echo ranging from a whisper to a sweeping roar. And that was what I was most unprepared for, the deafening noise of the “Sea of Red.”

It is never difficult to tell if it is game day in Nebraska, if you go anywhere in public, you will see at least one Nebraska shirt. Every news outlet will be giving the latest stats and pregame predictions. The flags will come out and garages will be opened up, snacks aligned on the tables, TVs dialed in.

As with most things, the effects become more extreme the closer you get to the epicenter.

Going from Omaha to Lincoln, we were cruising along the interstate steadily with a few slowdowns until we came to the final bridge into Lincoln. Here we came to a standstill as the bright taillights became my first glimpse of red in Lincoln. There were a few honks here and there, but as far as traffic goes, it was polite. Cars, streets, sidewalks, bars, and restaurants were all packed with mostly red shirts with a few white and black shirts sprinkled in for good measure.

Finally successfully navigating through the crowds and tailgates, we made it to campus proper. I had never seen so many people of every age on a college campus on a weekend that was not for moving in or Homecoming.

We made our way to the Student Union for food before following the crowds out to where the UNL Marching Band was beginning the pre-game warm-up. We spread out in the grass and made a little picnic of our Steak n’ Shake while we listened to the Jackson 5’s ABC and Don’t You Forget About Me from the Breakfast Club.

If you are looking for Steak n’ Shake in Nebraska, you will have to visit the UNL Student Union since it’s the only one in the state.

The band led the crowds to the stadium, where everyone flooded (in a friendly, if excited manner) into their seats. We went up the escalator, passing within arm’s length of the facade of the stadium in the 1960s. We reached the top and froze with the crowd, hands over our hearts, as the anthem played.

It was more people than I had ever experienced in one place at one time before (over 89,000), but otherwise it was your average sporting event until the video over the scoreboard started playing.

I thought the announcer was loud until the crowd let loose. I have never heard such a deafening roar made by human beings.

It lessened as certain sections cheered for their favorite players, each gracing the screen in turn. But it raised again, louder than ever (if that was even possible) when Coach Frost led “the Boys” (as I had heard the seasoned fans around me fondly refer to them) out of the tunnel and onto the field.

I was grinning from ear to ear. It had been a long time since I had been to Memorial Stadium, since my fourth grade fieldtrip. Sitting in the press box, running on the field, walking through the tunnel, and touching the lucky horseshoe – memories that had been biding their time – taking 15 years to truly sink in.

My cousin was especially excited for the marching band’s halftime show. A drum major at her high school, she conducted along at her seat as the band ran through the same set we heard earlier, this time with movement. I watched, appreciative of their talent moving across the field without missing a beat.

In the second half there came a point where I noticed fans putting their phones in the sky, flashlight lit, like they would at a concert. A few at first, it grew like a fire, catching and spreading from section to section around the oval. I did not understand it until the stadium lights dimmed and the screens all turned a vibrant red. 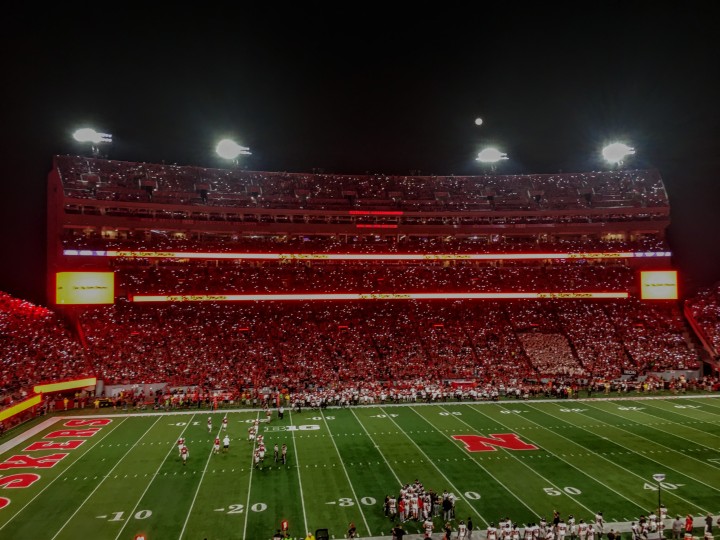 An act of solidarity. A physical representation of the heart, the passion inside each Nebraskan.

As the game was played and calls were made, passes were caught and many not, the critiques came. Exacerbated and whispered, constructive and harsh, everyone had an opinion. But no matter the score or missed opportunities, one thing always remained.

Through the national titles and the blunders, Nebraskans have stood by their team. Hoping (and praying) that the Boys will come through. That through hard work and drive, success will be achieved.

This is the same belief and dedication that has led to a record 370 consecutive sellouts.

By the time I was old enough to sit through any part of a football game without losing interest (which took me until my 20s), Nebraska’s coaches did not necessarily reflect that ideal. 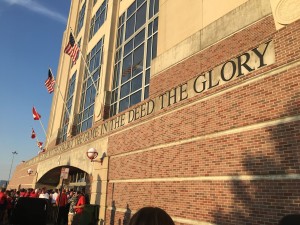 Returning to his roots, Frost came to kill off the recent so-so attitude, making room for new positivity and success to grow once again. Quarterback for the Husker team that went a perfect 13-0 and split a national title in 1995 under the guidance of Coach Tom Osborne, Frost has once again instilled in Husker Nation that red stands for the heart left on the field, in training, and throughout the community.

To ensure that red stands for Nebraska and all that we believe in.

And if you are ever wondering what that is, you need only go to a Nebraska Cornhusker football game. Where every special guest to the game is cheered for except for our military personnel, veterans, and first responders. For them, the thunder is rivaled only by Coach Frost and the Boys.

So, yes, it is a pilgrimage of sorts. Journeying from near and far, Husker Nation gathers to celebrate and share what we believe in. We are bound together and our red burns brighter.

The content of this website is mine alone and does not
reflect the views of the U.S. Government, the Peace Corps, or the Moroccan Government.